For a long long time, I’ve wanted to build an arcade machine of my own. I researched doing it about 17 years ago, but the cost and the time weren’t something that I had (and I guess I still don’t).

Since about 1998, I’ve been using the MAME (Multiple Arcade Machine Emulator) program to run ROMs (video games) of all of my favorite games from the 80s and 90s. So the really really tricky part of building the program to run the games has already been done.

But what about the computer to run the games on?

Advancements in technology have made it much much easier to build a low cost, high functioning arcade machine. The main issue that I kept running into was needing to build a mega computer with a large computer monitor to actually play the games on. 20 years ago, that would have been extremely expensive. But now that we have credit card sized computers, such as the Raspberry Pi, the cost is significantly lower.

There are dozens and dozens of plans for bartop arcade cabinets online, but none of them were exactly what I wanted. So I decided to make my own design from a combination of different designs I found. One problem that I discovered is that all of the bartop arcade machines that were built for two players were actually very crowded and having two grown adults playing at the same time would basically have them touching shoulders with no room to move at all. So I knew I would have to make mine much wider than any other designs.

First, here is a video of my finished cabinet:

If you do my type of control panel, you’ll need all of these additional parts:

I ordered my graphics from this place and they are amazing, sharp and vivid.

Raspberry Pi’s are really neat little things. You can do so many things with them. I’m running a development server with 4 of them, and I run a Plex server with another one that host thousands of movies online so I can watch them from anywhere.

We’ll be using RetroPie, a retro gaming emulation operating system specifically for Raspberry Pi, to transform the Pi into your central computer for the cabinet. Not only does RetroPie play arcade games, but it also plays NES, Super NES, SEGA, and a bunch of other systems. It’s pretty incredible.

Depending on the size of your micro SD card, you’ll want to hunt down a RetroPie image. There are tons listed here: http://www.arcadepunks.com/retro-pi-downloads-page/

I’m not a fan of downloading things through online downloading companies like MegaDownloads. Most of them will charge you for large downloads or at least want you to sign up for an account to access anything. So I prefer to use the torrent links. I’ve set my Pi up to use Rey’s Image. Here is a magnet link to the sd card image. It will likely take 5-8 hours to download the .img file because they are huge. There are lots of different RetroPie images online if you just search for them. I’ve tried a handful and Rey’s Image is by far the most solid build and is almost problem free.

Once you download the .img file, you’ll need to transfer the img on to the SD card. I’d highly recommend either the Apple Pi Baker or Etcher to transfer your .img file to the sd card.

After you transfer the image to your SD card, you should be able to put in the Raspberry Pi and fire it up. For some folks, that may be enough. You could easily just hook that up to any TV and attach your controllers to your Pi and be done with it. But for us, we’re building an arcade cabinet and doing things the hard way. 🙂

As I mentioned before, I wasn’t able to find the exact blueprints that I wanted, so I elongated parts of various blueprints and created my own layouts for the cabinet.

Here are some blueprints that you can print off and cut from. You’ll likely have to print these off and tape them together unless you have a large format printer:

My cabinet has a deeper marquee area by just an inch or so, and the control panel area is deeper by about 10 inches to accommodate the trackball, spinner and the extra joystick. It’s also much much wider than most bartop arcade cabinets you’ll find online.

Update
I get a lot of email about my side panels and measurements, so I’ve finally gotten around to creating these. They aren’t to scale but they are pretty close. Most of the measurements are pretty accurate, but it’s hard to get absolute measurements because of the curves on the corners. 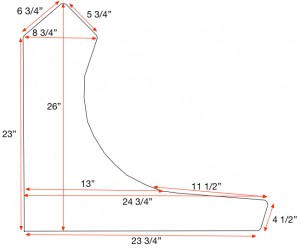 Here is a PDF of the plans.

I did not include the curve radius on the front part of the side panel because I totally freehanded this. Basically what I did was cut all part of the side panel except for that curve. I trimmed it so it was pretty close to what I wanted and then sketched the curve. Then I cut it with a jigsaw and used a file to make it smooth and even.

One of the first thing I would research is the number of buttons your favorite systems use. In the end I opted for 8 buttons. I’d rather have too many, than too few and not be able to play a certain game. Plus…and I just realized this, the more buttons you have, the more you can program to do different things, and the less you have to depend on a keyboard. Check this page out for all of the different system button layouts. 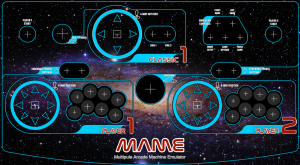 If you want the exact Photoshop PSD control panel file I made, here it is. It’s huge (over 200M) and you’ll need the NASA fonts. I designed this entire thing myself, and after all this time, I just realized that I misspelled multiple (multipule). I’ll post the marquee design later.

Before you cut MDF board…

Before you start cutting MDF board, it would really be helpful to make a full scale model to help you get all of your measurements. Make it out of cardboard so that you can draw on it and cut it easily. You’ll want to also print out your templates for the control panel. I setup all of my buttons and played a few games just to see if I like the layouts. I ended up changing the button layout 3 times until I found the one that I liked.

You can see on the first photo that the bottom part of the side of the cabinet doesn’t extend far enough out to support such a large control panel. So I knew I’d have to customize the sides. You can also see where I traced the blueprint for the marquee area on the side, and how I extended it out further to accommodate my speakers and lights.

Here is the second part.

Check out some of the other post. You might find them helpful or interesting.
Tips for traveling to, around, and from Peru (plus some helpful COVID travel tips)
Travel
Building an Arduino Nano Lightsaber – Part 1
Uncategorized
Star Wars 3D Printed E11 Stormtrooper Blaster with Arduino Electronics – Part 2
Uncategorized