I’ve spent a few days looking over the two Arduino blaster plans that I’ve found and listed in my first post. While they are really well done and have some amazing features, I’ve found that I want parts of both of them and want to exclude other parts. So the best way to do that is to just do it myself and make this from scratch.

Here is my first attempt at a blaster light with an Ardruino Nano:

Basically what I wanted was something simple that was just a trigger and a light. I went a little further after this video and added a sound as well. The thing is, I haven’t found any plans anywhere on how to do any of this at its basic level. Fortunately, I’m a web developer and Arduino code is simple. But I can tell for other, this would be confusing and hard to figure out.

This the full schematic that includes lights and sounds. 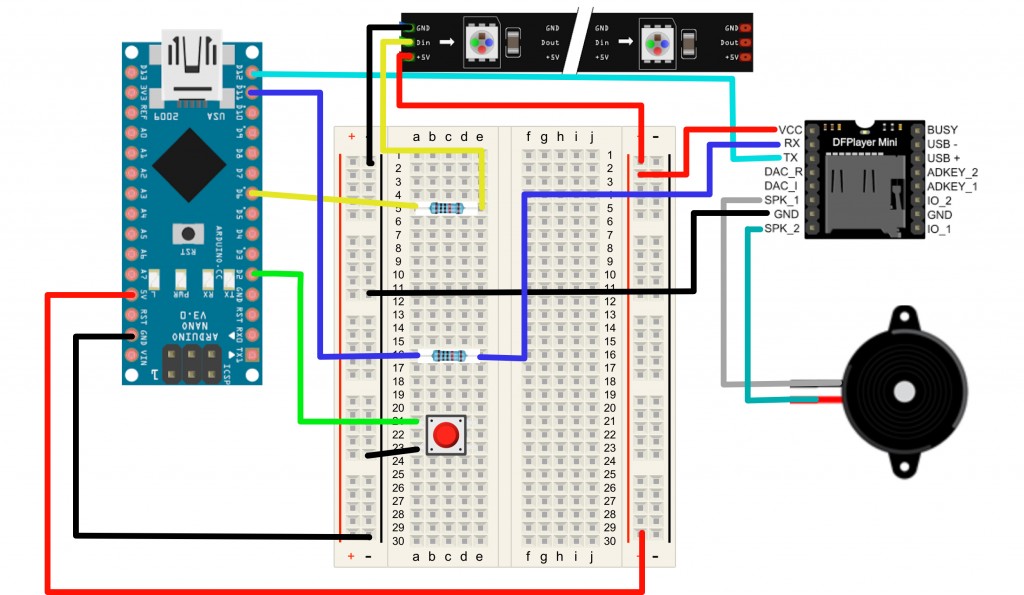 You’ll notice there isn’t battery yet. I haven’t gotten that far yet, so I haven’t figure out which battery I want to use. I may have to change out the resistors as well.

Check out some of the other post. You might find them helpful or interesting.
Tips for traveling to, around, and from Peru (plus some helpful COVID travel tips)
Travel
Building an Arduino Nano Lightsaber – Part 1
Uncategorized
Star Wars 3D Printed E11 Stormtrooper Blaster with Arduino Electronics – Part 1
Uncategorized